We fit in the bus!

The people of Paraguay are what make the country wonderful.

For training (about 10 weeks) I’m living with a host family of seven – a father, a mother, two sisters around my age, one sister and one brother about 10 years younger than me, and a much younger sister.

I feel like a long-lost cousin—one that wasn’t born in Paraguay but has always been part of the family. My family makes me feel welcome and included even though I don’t know Guaraní (Spanish has been a great bridge) and I know few of the social norms of Paraguay.

In Paraguay you say “hi” to people when you walk by and it’s not strange to look at people as you pass them. It’s the small town of New England without the icy edge of New Englanders. News travels fast and everyone has countless cousins. The most practiced pastime is sitting with family and friends while chatting and drinking tereré. 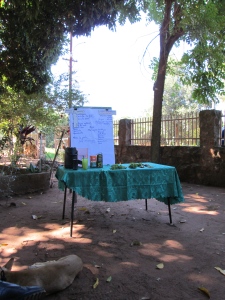 In the US we blame a (large) portion of our battle with non-communicable diseases, like diabetes and obesity, on processed food. And, while the Paraguayans I’ve met don’t eat many processed foods, I can’t say the average diet here is much healthier – enter the carbohydrates, meat, and fat. Most of the traditional foods in Paraguay are heavy in carbs (especially corn and mandioca) and involve frying or fat is some other way…and red meat. And, much like processed food they are quite delicious (“rico” in Spanish).

One of my trainers did a good job of putting the diet into prespective. The trainer mentioned that many of the foods served Paraguayans well when they were working long, hard days in the fields. But, now that life has changed and things are easier the calories aren’t needed anymore. Things, like food, that have a deep cultural connection evolve a lot slower than society moves into modernity. 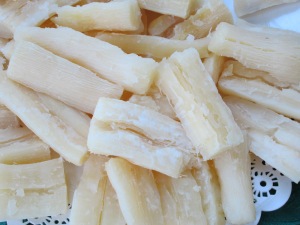 Sopa Paraguaya – a type of corn bread with cheese