I leave the USA to start my Peace Corps service in Paraguay in 3 days. I’m excited and starting to get butterflies in my stomach.

Before I’m in the thick of things, I wanted to share answers to common questions people have asked about the Peace Corps and Paraguay as I’ve been saying my goodbyes.

About the Peace Corps

By joining the Peace Corps I’ve committed to 27 months of service in Paraguay as a community health volunteer.

During the first 3 months, I will live with a host family in Asunción, the capital of Paraguay, and attend training most days during that period. The training will cover language, culture, and project-related information (in my case health).

About 8 weeks into training, I’ll find out where in Paraguay I’ll be serving my 2 years (my site). I won’t know exactly what I’ll be doing until I arrive at my site because I’ll work with my site community to determine with which project(s) they would like to me help.

Paraguay is a landlocked country in South America. Paraguay is: 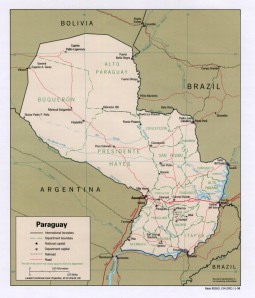 Paraguay is a constitutional republic. The current president is Horacio Cartes. He took office in 2013 and the next presidential election is in 2018. Some key historical events include:

Some facts I find interesting about Paraguay: