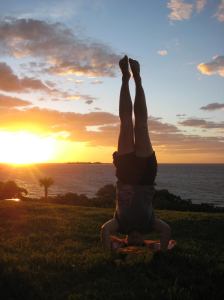 I went on vacation to Uruguay over the New Year. What a pleasure it was to be reminded of the salty ocean breeze and relieved of the humid heat that is Paraguay’s habitual expression. I passed the days in several of Uruguay’s coastal cities. I slept in a neat little hostel in Montevideo, the capital. I felt like I was in Europe.

It’s hard to express how amazing a hot shower with real water pressure feels after months without. I’d nearly forgotten that there are places on Earth where buses only stop at bus stops and where people only speak a language I know well (Spanish).

There were many highlights. Walking along the beach. Viewing Montevideo from the top of maybe the tallest building in the city. Swimming in the ocean. Writing #PCPY in huge letters out of sand on the beach. Taking more selfies than anyone should ever take. Glimpsing the surface of Uruguay’s historic sites. Eating a dulce de leche ice cream Sunday to celebrate the New Year. Hanging out with friends and meeting the eclectic people who fill hostels. Bringing in the New Year with zillions of mini firework displays on the beach and in the street—yes, fireworks were set off in the middle of major city streets and feet from apartment buildings. 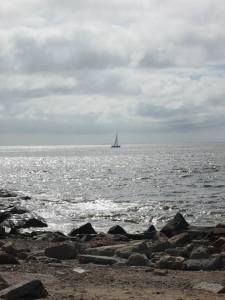 The trip fulfilled my almost constant desire to explore new places, but I also missed my little home in Paraguay as soon as I cross the boarder. I wasn’t surprised I missed Paraguay, but the strength of the feeling was unsettling.

I found myself watching the world through a series of lenses, not just the two I usually use in Paraguay. Every night in Paraguay I look up at the stars and wonder if my family in the States can see the same stars. All I know is that Orion’s Belt is called the “Tres Marias” in Paraguay. In Uruguay, I looked up at the stars and wondered if my States family could see them and if my Paraguayan friends were outside drinking terere and looking at the moon like they do when I’m there.

In Uruguay, I contemplated how location changes reality. Watching the sun plummet into the sea, I wondered what the point of my vacation in Uruguay was. It was fun and all, but the point of it was equivocal. The answer came on the day-long (yep, 24 hours) bus ride home.

The point was to shake things up. It’s easy to fall into the bore of routine and familiar, no matter where you live. The regular makes us feel secure, but the cost of too much security is the loss of perspective.

I returned from Uruguay more tired than when I embarked. The ocean made resting impossible. But, who goes on vacation to sleep? I did come back rejuvenated. The crash of the waves lifted the benightedness of the daily same old that plagued me before the trip.