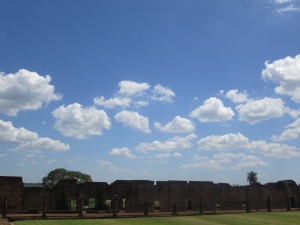 The Jesuits were in Paraguay from 1607 until 1768 when Carlos III of Spain kicked the Jesuits out of all of South America. The Jesuits are the reason Paraguay is still a bilingual country. They formed religious communities for the indigenous people the Guaraní (the most prominent indigenous group and language in Paraguay) that provided protection from slavery and preserved the language. It is doubtful that the Jesuits’ main mission was to preserve indigenous culture, but it is the greatest influence they’ve had on modern Paraguay.

I find the story of profound, unexpected victories inspiring.

In Peace Corps training, health volunteers in Paraguay, they told us not to lose hope if it seemed like we were having no obvious impact. As they liked to say, “You never know what good you’re doing.” If you’re into behavior change or prevention (of any kind) or life skills such uncertainty is familiar because “you can never be sure” is the bane of all those disciplines. Of course, “never” is a bit of an exaggeration, but measuring the impact of programs/materials/activities designed to change actions, to influence decision-making, or to empower individuals requires a longitudinal study that won’t be complete until many years after the fact and will be so dense that congressmen and other money-controllers won’t have time to read it and their underlings won’t want to read it.

I spend a lot of my time working with youth. The idea is to help them develop strong self-esteem, leadership abilities, and other skills so they make better decisions and will have happier lives. I often wonder if anything I do with the youth is going to be useful or influential in their lives. But, I am satisfied because I know my time in Paraguay will be like that of the Jesuits: I’ll never know the influence I had, the impact will be profound for someone, and it will be unexpected.