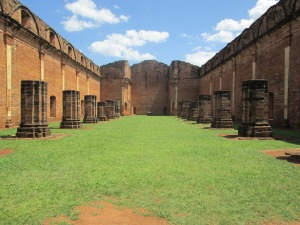 I thought I looked like a lot of Paraguayans—I have brown hair and I’ve tanned to be several shades darker than I was in the northlands. I sort of thought I’d done a good job blending. Nope.

I’m mostly German and Irish with a mix of other groups is my heritage. Before coming to Paraguay I didn’t stick out with my freckles and greens eyes, actually I was so nondescript in the States that I figured if I needed someone who had never seen me to pick me out in a crowd I’d just wear something interesting.

Paraguayans compliment me on my light skin. Recently, I was feeling very integrated at a birthday party. Then, several of my students who were at the party looked at me funny as I walked across what would later become the dance floor. I asked them why they looked at me that way and they told me my legs were pretty…because they are so white. I’ve never before been in the minority. It’s weird having a physical trait that people use to judge you—especially one over which you have no control.

It’s not uncomfortable when Paraguayans comment on my skin—they tend to ask if I’m German (in their minds all light-skinned people are German, just like all dark-skinned people are Brazilian)—because in Paraguay any physical aspect of your body can and is a topic of conversations. The number of times I’ve been told I’ve gained weight (or lost it) in Paraguay is mind-boggling.

It’s not something I think about all the time, but comments about my skin remind me that I’m not from Paraguay. They make me feel like an outsider. Usually the skin-color conversation concludes when Paraguayans tell me that white skin is pretty and I say that their skin is beautiful too and that I think I’ll be their color when my freckles blend together. They laugh. I don’t think Paraguayans would understand if I told them that tons of people in the State pay to go to tanning salons so that they can be the color of the average Paraguayan.

Why is light skin considered the ideal, even in regions where it marks an outsider? When we don’t look like the people around us, why do we have moments of doubt about whether or not we belong?