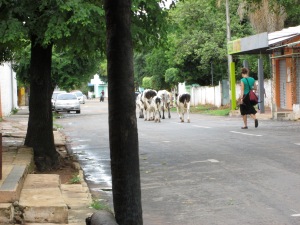 If you can overlook the fact that everyone is not speaking English and you’re never entirely sure what is going on around you, Paraguay can seem a lot like the US, especially the rural US. However, contradictorily, you would never mistake your life in Paraguay for that in the US.

So what makes the two countries different? What makes Paraguay a developing country and the US a developed country? These are hard questions, but here are some observations about Paraguay I think illustrate some aspects of life here.